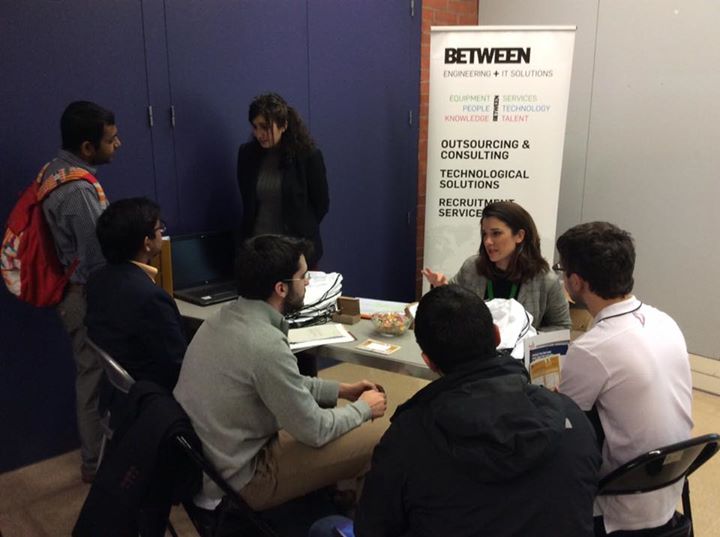 BETWEEN was present at the fourth edition of the Networking Talent Day held by Universitat Politècnica de Catalunya (UPC) on 4 February. The event, which took place at the Campus Nord de Barcelona, was a success in terms of attendance and a great opportunity to meet new young talents.

Among the attendees we found civil, chemical, telecoms, mechanical and industrial engineers and architects, recently graduated or in the final months of their degrees. Among them were many international profiles, especially students from India and China.

Among all the specialty fields, it was the mechanical and chemical engineers that showed the greatest interest in learning about BETWEEN and acquainting themselves with the company’s culture, objectives and current vacancies.

It is usual for students to stop by our stands in search of information on our company as a potential career option, and a growing number of them are referred to us by some of our Betweeners, which fills us with pride, as it shows that they view BETWEEN as a good place to start a professional career with good future prospects.

Owing to the nature of BETWEEN’s business, we do not offer internship programmes for students. However, this kind of events are an excellent place to meet people with the potential talent that will allow them to become Junior Betweeners in a short time.

The number of students interested in learning about our company was greater than in the previous editions, according to the BETWEEN team present at the Networking Talent Day. As a result, at the event’s closing time there were still several students waiting to talk to our team and the information interview schedule had to be extended.

At BETWEEN we believe in strengthening the links between the academic and work worlds. This is evidenced every year by our participation in different events similar to the Networking Talent Day. The growth of the company, whose core asset is and always will be its people, would not be possible without new generations constantly joining us, bringing with them their ideas, knowledge and enthusiasm.