The ETSEIB Racing Team, Best Design Award for the 3rd Edition of Motostudent 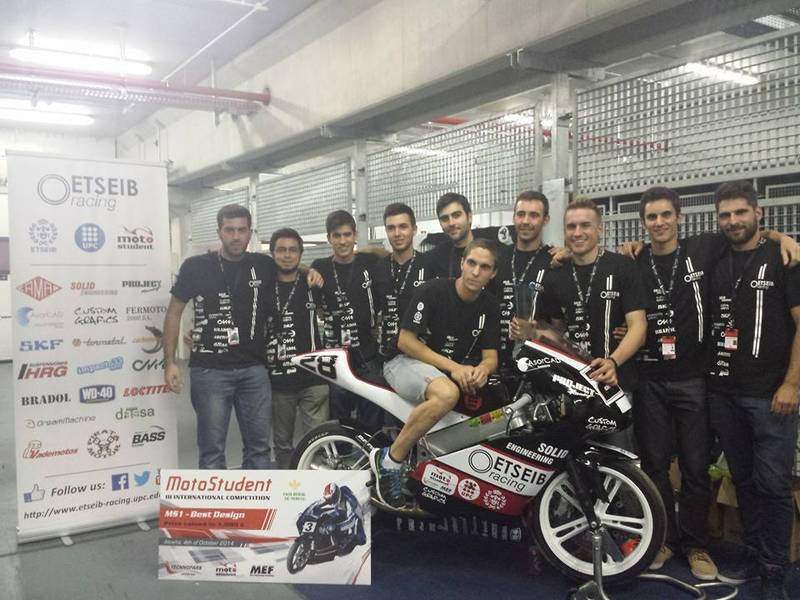 The ETSEIB Racing Team, sponsored by Solid Engineering, won the Best Design Award for the 3rd edition of Motostudent. The event took place from the 2 – 5 October at the Aragon Motorland Racetrack. This is the same team that won first place the previous year.

The Motostudent Awards are classified into MS1 or MS2 categories. In the MS1 category the first prize award is given to the Best Industrial Projectand a further two to the Best Design and the Most Innovative Project. In the MS2 category there are first, second and third prizes for the best classified, although other vehicle’s aspects are also taken into account.

For many university students Motostudent is their first important project and a good way to ease into the labour market. The training students receive during the months they spend preparing their prototype means they gain extensive experience for their professional future.

Moving on to the racing track, the winner of the race that took place on the 5th of October was the UMH Moto-Experience Team, from the Polytechnic College in Elche, Spain.

The MotoStudent competition brings together a total of 400 students and 30 teams from universities across Spain, Portugal, Italy, Hungary, Brazil and Ecuador. Each team was provided with common elements for the design, manufacturing and testing of their prototypes of 250cc, 4-stroke engine racing motorcycles.

For yet another year Solid Engineering has technically collaborated in the Motostudent, this year assessing and assisting the ETSEIB Racing Team with the design and validation by simulation of the structure of the prototype’s