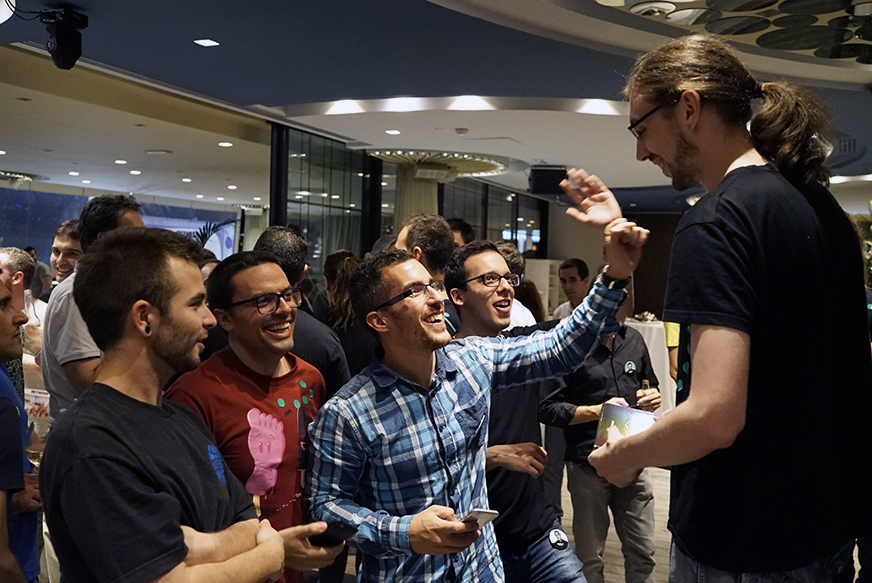 Why do we love summer so much? I’m sure everyone has plenty of reasons to love summer, but Betweeners have an extra one: the celebration of BETWEEN’s Summer Night, an unique event which took place at Café del Mar Barcelona Lounge, in the Maremagnum building, and which was attended by more than 250 Betweeners.

Following the tradition of the last BETWEEN Nights, the corporate party was based on a key topic which we knew Betweeners would be crazy about: TV shows! In order to give the party the right atmosphere, every participant wore an identification badge which turned them into famous characters from well-known TV shows for a few hours. Adopting their characters’ personality, Betweeners took part in different activities.

To make it even more exciting and to encourage participation, we also had a fierce competition which kept the excitement to the max from the very beginning. As the invitation to the Summer BETWEEN Night announced, the geekiest T-Shirt of the night would win a prize. Just as we expected, all T-shirts were extremely geeky and the competition was a close one, but Eloi Trepat, a Betweener from IT LAB, finally won the adventure trip and SPA break for two that we were giving as a prize.

The team ETSEIB Racing presented their motorbike in the IV MotoStudent competition (2016-2017), which came as an unexpected and welcome surprise. Thanks to this bike they became the champions in the MS1 (1st position, industrial project) and MS2 (2nd position) categories. BETWEEN Technology has been collaborating with the ETSEIB Racing team for years, preparing the vehicle that will participate in MotoStudent, a competition which brings teams of international university students together with the goal of designing, making and testing a racing motorbike prototype. The company offers advice on simulation and chassis calculations (BETWEEN LAB) and on marketing strategy issues.

This second corporate event, which took place at the beach, had a quick review of the business performance during the company’s first six-month period. CEO Òscar Serret provided the usual summary of goals achieved by the company and announced new goals and news for the second six-month period. He was not the only one to make a speech. Pau Guarro, the company Business Unit Director, talked about what being a Betweener is and Cristina Pellicer, Head of Talent Manager Department, made a review about the training and BETWEEN People Plan results.

Betweeners alternated toasts, laughter, jokes and snacks with continuous trips to the photo booth, which provided funny graphic evidence of another unforgettable BETWEEN night.

The summer party was also the perfect occasion to celebrate the second anniversary of BETWEEN TECHNOLOGY as a brand, a company that, despite its apparent youth and its innovative approach, has more than twenty years of total experience through the companies that gave way to the new company.