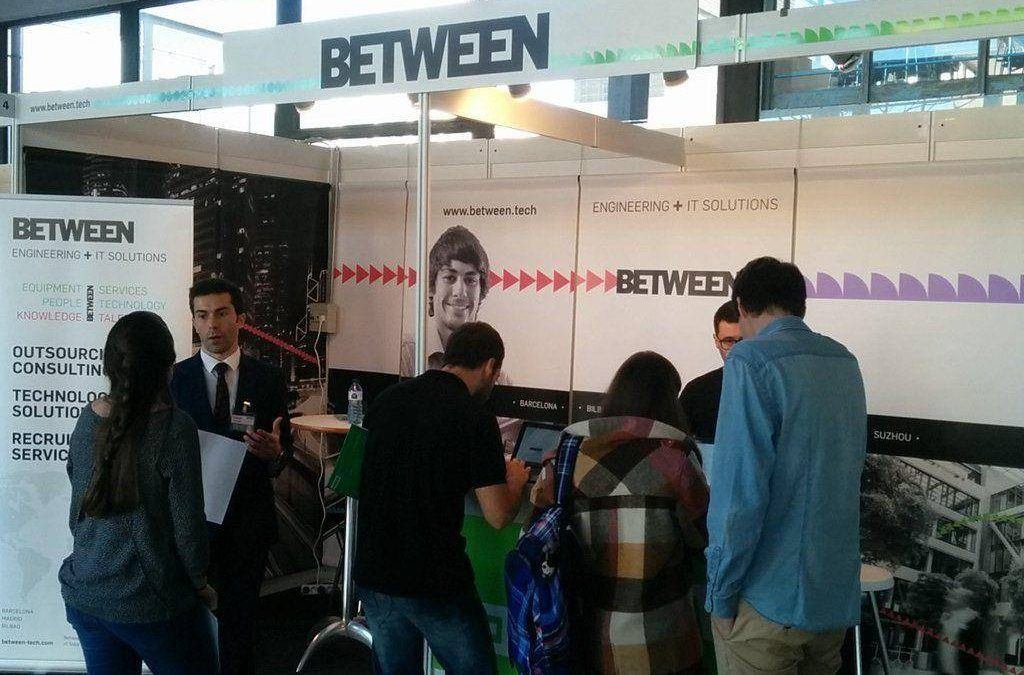 In March, Between took part in the ETSEIB Forum and Entérate Jobs, two events that share the goal of drawing together the academic and the professional world.

The aim of this kind of meetings is double; on the one hand, it allows students -most of whom have still not had their first work experience- to get to know for themselves labour reality at companies. On the other hand, and equally important, companies get the chance to keep up to date with the current academic reality, they get to know the potential of students and at the same time they recruit talent.

Between is a company committed to the talent of young students. It has been taking part in several of these events for years -participating in some of them year after year, as for example the ETSEIB Forum, which Between has been sponsoring this year– since it has a big pull for young people who can contribute to their teams with fresh ideas, thrill, passion and eagerness for working, while they gain vital skills alongside their senior co-workers. Between believes this is a symbiosis all companies should experience.

Attending the ETSEIB Forum and Entérate Jobs last March allowed Between to get to know a lot of future engineers, many of whom were very talented. While at the ETSEIB Forum most of the participants were future industrial engineers -still in the final years of their degree-, at Entérate Jobs there was a great variety of profiles, ranging from Mechanical to Electronic, Chemical or IT Engineers.

In both of these events Between had the chance to make the company known to the public not just by exhibiting at a stand.

At the ETSEIB Forum, Pau Guarro and Xavier Téllez, Business Unit Manager and Account Manager at Between -and both ETSEIB’s former students- gave a talk to participants regarding what Between does, what the values of the company are and what kind of professional profiles it handles.

At Entérate Jobs, with a total amount of 33343 attendees, Between’s Human Resources and Recruiting team -represented by Cristina Pellicer, Vanessa Ron and Laura León- carried out two group dynamics in which after explaining what Between is, they had the chance to approach all present candidates and learn more about their profiles. This activity also served as practice for candidates in case they have to attend one in other future selection processes.

Motivation for learning how to enter the working world

Most of the participants at these two forums were junior profiles (most of them engineers, or future engineers) seeking for their first job experience. This means they were not just looking for an internship or their first job opportunity, but they were also eager to know all details that could help them enter the labor market.

As it is usually done in Between’s social media, useful information was offered at corporate stands to help students find their first job. Between’s consultants gave some advice to the future engineers willing to start their career on how to improve their curriculums, where to look for a job or the importance of their LinkedIn profile.

The experience at both events has been very positive for our company and has enabled us, once again, to get to know the traits of the next generation of engineers that belong to the well-known Millennial Generation.