BETWEEN Technology, among the one hundred largest ICT companies in Spain

BETWEEN Technology has positioned itself among the one hundred largest ICT companies in Spain, according to the “2018 ComputerWorld Ranking”, which publishes last year’s revenue figures of companies belonging to this sector.

For the 27th consecutive year, ComputerWorld’s editorial department has prepared this ranking with the aim of providing the economic data of the 100 largest Information and Communication Technology (ICT) companies in the Spanish market.

BETWEEN Technology has been included in this ranking for the first time, taking the 72nd spot after a year of consolidation. This ranking is led by Telefónica Orange and Vodafone Spain. 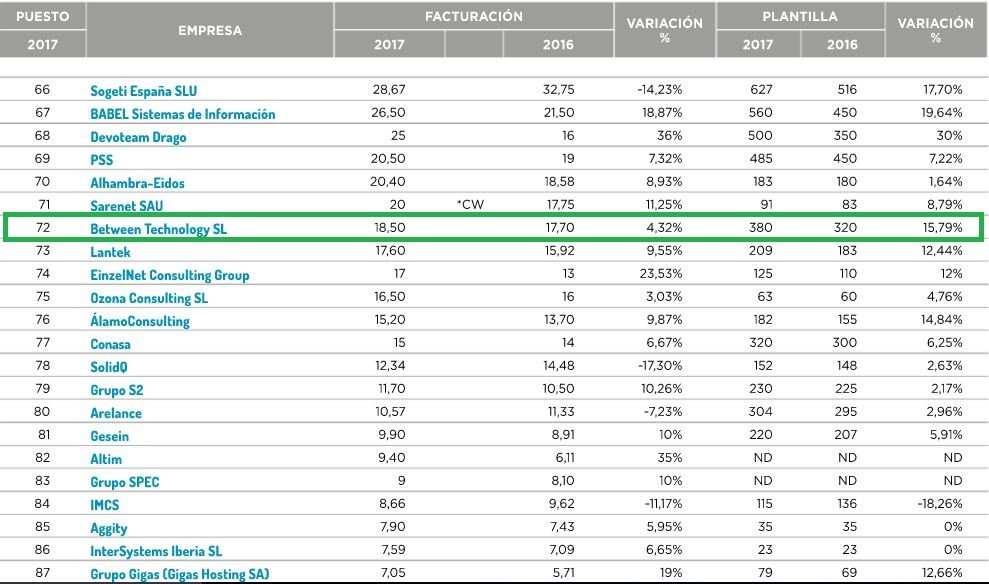 The ICT sector, in upward trend

Preparing this ranking, which is the first one offering global data on the ICT Spanish sector, entails an exhaustive data compilation. In order to obtain all this data, it has been necessary to design a questionnaire and send it to more than 300 companies in the IT and Communications environment in our market. One of the conclusions this study has reached is that the ICT sector in Spain gained more than 50.000 million euros, which means that there was an increase by more than 7% in comparison with the previous year’s figures, thus confirming the upward trend we had been noticing during the past years.