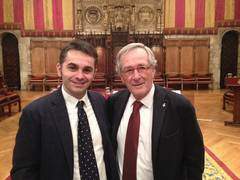 Solid Engineering has received recognition for its commitment to create employment in Barcelona. The award, granted by Barcelona’s Town Hall to 130 companies from the Catalonian capital, recognises the achievement in 2014 for the company’s high employment figures.

The diploma accrediting the award was given to those honoured with it at a ceremony held at the Cent Salon at Barcelona’s Town Hall last Friday 23th of January. Òscar Serret, Solid Engineering’s CEO, was in charge of collecting the award from the Mayor of the city, Xavier Trias.

During the event, also attended by the Economy, Business and Employment Deputy Mayor Sònia Recasens, 40 youths who found a job position in 2014 thanks to the diverse employment services promoted by Barcelona Activa were also present.

Solid Engineering has been undergoing continuous growth in human capital for two consecutive years.  Thus, whilst in 2012 the company had 59 employees, in 2013 the figure rose to 72, until finally increasing its workforce to the current figure of 123 employees in 2014.