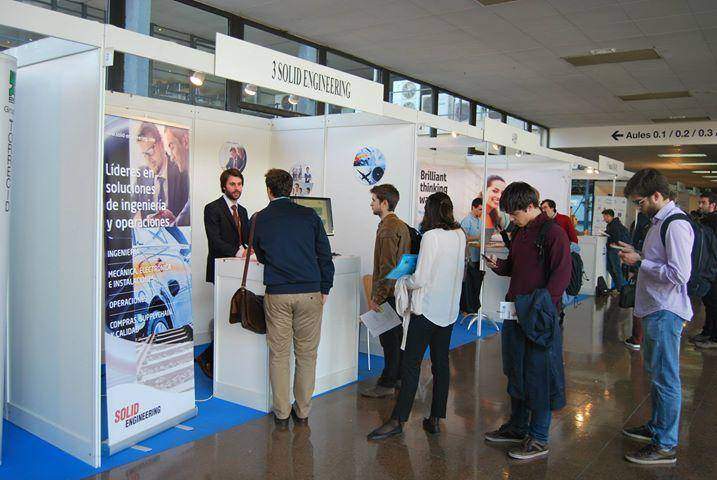 Last week Solid Engineering attended the ETSEIB Forum, Catalonia’s most important fair for the industrial sector, and a reference point in the academic arena for engineering students.

Organised by the ETSEIB- UPC, the Forum’s main goal is to bring the world of employment closer to engineering students. To help to achieve this, diverse companies attend the event so future engineers can be exposed to them.

At the Solid Engineering’s stand, students enjoyed the opportunity to get to know the company better, via the information they were provided with by both the Human Resources Department and the Commercial Department.

25 years of the ETSEIB Forum.

The success of this event continues to grow year after year, so much so that in 2015 the ETSEIB Forum has celebrated its 25th anniversary.

At this edition, besides the 50 companies that took part, the launch of the new ETSEIB Alumni Club was celebrated. This new group, framed within the network of former students from the UPC (UPC Alumni), has the objective to bring together former students from this college to share professional concerns, experiences, and boost networking, collaboration and training.

Pau Guarro, Commercial Director at Solid Engineering and former ETSEIB student, is the President of the ETSEIB Alumni Club. He, together with a team, will be in charge of shaping this project thanks to the many ideas and initiatives that arose during the co-creation workshop held on the 12th of March.

Solid Engineering is very proud of its participation at the ETSEIB Anniversary Forum –an event it has attended for several years now-, which helps the company to uncover the current reality of universities and reinforce links with future engineers.